Laser marking is a great way to produce dark marks on stainless steels; by precisely controlling the laser and heat input, you can get an oxide layer to build up on the part, which, in turn, produces the characteristic appearance without melting the material.

For parts with good thermal sinking, this is quite straightforward. As the part reduces in size and volume, however, it can be more challenging. Take, for example, the stainless steel tubing used in the medical industry. Because creation of a dark mark requires the part to be at the right temperature for a specified amount of time, you run the risk of overheating under thermal runaway, leading to distortion or even collapse. The implementation of a suitable “banding” strategy solves this problem with single or multiple passes completed at high speeds with tuned laser parameters.

Here are three different banding techniques that can be used on tubing:

Again, any of these methods may use multiple laser passes to build up the mark. Multiple pass processing is especially recommended for fixed length text or logos/graphics. If the physical length of the mark changes, however, the time gap for the laser to return to the same part of the mark varies and may not produce the required effect. This issue can be alleviated by employing double or multiple pass cross hatching on every letter before the next one is marked. 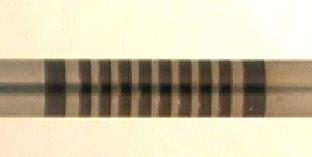 Nanosecond vs Picosecond Black Laser Marking: Which One Stands Out?

Black, Corrosion Resistant Marking: Why You Should be Using a Picosecond IR Laser for Dark Marking Applications