Home/Blog/Laser Marking/Nanosecond vs Picosecond Black Laser Marking: Which One Stands Out?

Our recent blog post Black, Corrosion Resistant Marking: Why You Should be Using a Picosecond IR Laser defined “black marking” and presented – at a high level – why picosecond lasers are superior for making black, corrosion resistant marks on metal. Since that post, we’ve conducted some very specific research comparing black marks made with nanosecond fiber lasers and those made with picosecond lasers. Here’s what we learned.

What is Black Marking?

Defined simply, a black mark is:

Where are These Black Marks Used?

Black marks are used in several industries including automotive, marine and home appliance but they are most commonly found in medical device manufacturing – and includes both single and multiple use devices and tools:

Laser interaction with material is determined by the its intensity – that is:

The amount of laser energy  divided by the time the Energy is applied and the area over which you are marking.

For black marking, these three parameters must be below the ablation threshold of the material so you’re not actually removing material, but rather simply interacting with it.

Both nanosecond fiber lasers and picosecond lasers are capable of making black marks, but because the picosecond laser’s pulse duration is so much shorter, the process is actually athermal meaning there is limited heat generated at the part surface. The laser actually restructures the surface resulting in a matte black mark that traps light.

Nanosecond laser marks by contrast are created via a thermal process and tend to have a somewhat shiny, reflective sheen which can hinder readability. Care must be taken not to overheat the parts which will result in cracks that can flake and peel away over time. The nanosecond black marking process often takes more time as the need to carefully manage heat input results in multiple passes to make the dark mark. 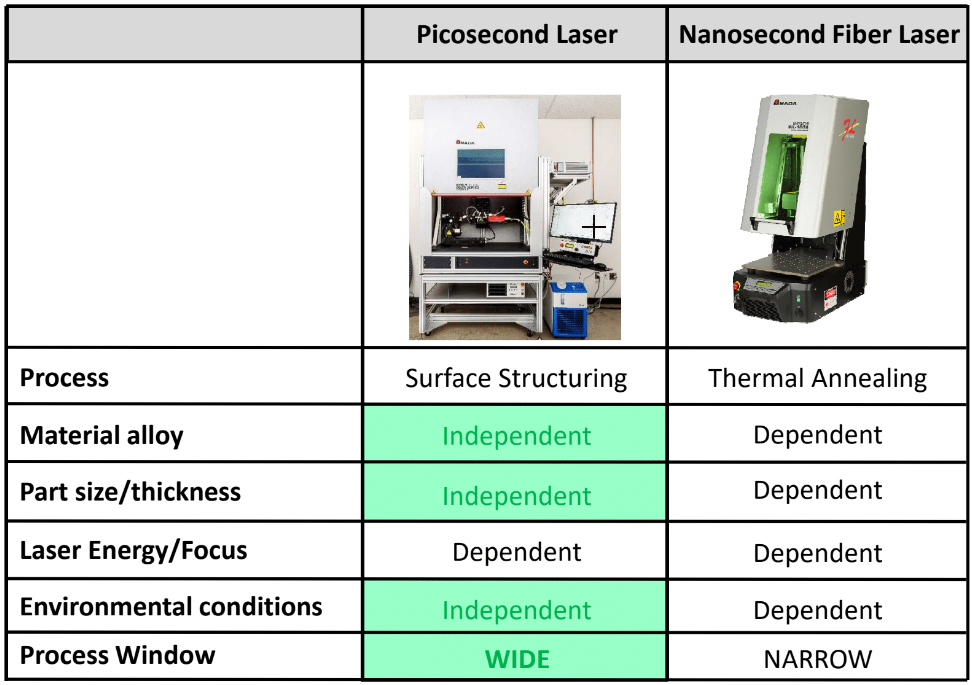 We subjected the marked tubes to various tests including:

Both the picosecond and nanosecond marks fared well in the passivation tests. But when it came to autoclaving (commonly used in the medical industry to clean reusable instruments) and salt spray testing for corrosion resistance, the picosecond marks were clearly superior. In the images below, the red circles indicate areas where the oxide layer has been broken. No issues were noted for the picosecond laser marks for the tests we ran and the magnification we used to inspect the parts.

In summary, black laser marking is possible with both nanosecond fiber and picosecond laser sources but picosecond lasers tend to produce darker, matte marks which retain their integrity through passivation, autoclaving and other destructive testing better than their nanosecond counterparts. That said, any process or mark should be tested and confirmed to meet your specific requirements.

Black, Corrosion Resistant Marking: Why You Should be Using a Picosecond IR Laser for Dark Marking Applications

Material Processing Solutions for Manufacturing – One Size Does Not Fit All